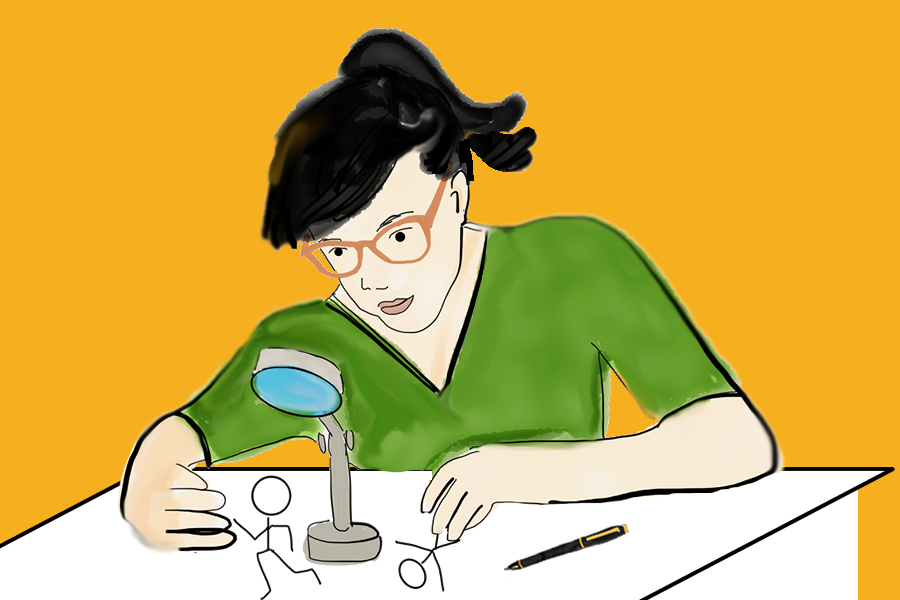 Do you ever look down to see that you’ve doodled all over the margins of your meeting agenda, then quickly hide it so that no one else notices?

Does it make you cringe in embarrassment when others at the table are taking logical, linear, non-doodled notes and you look down to see your page covered with flowers, random angles, or that cartoon guy who is looking over a fence?

When you doodle, are you struck by the illogical fear that someone is going to call you out and send you to the principal’s office?

What if I told you that there is science that proves doodles aren’t silly, nor are they a sign of lower intelligence? In fact, doodles are evidence that you are smarter, more analytical, and better focused than your non-doodling colleagues.

Is it “silly” if it’s firing up your prefrontal cortex?

When researchers  looked inside the brains of people who were doodling, coloring and free drawing, using functional near-infrared spectroscopy (fNIRS), they found that all three activated the prefrontal cortex.

Why does the prefrontal cortex matter?

It’s the part of the brain involved in managing your ability to problem-solve, reason, use logic, and remember things. It’s also the part of the brain you use to direct your attention—which is serious business when it comes to staying focused in conference rooms, classrooms, or even on that boring teleconference where Joe is going over the very same thing he presented last week.

All of those hearts, flowers, and stick people were busy firing up neurons and increasing blood flow.

Those characters in the margins are proof that you are more focused than the person sitting next to you.

According to research by Jackie Andrade, PhD, of the University of Plymouth, UK, when participants monitored a monotonous mock telephone message for the names of people coming to a party, the doodling group performed better on the monitoring task and recalled 29% more information on a surprise memory test than those who didn’t doodle.

What does this mean for all of us scribblers?

It’s evidence that doodling isn’t a sign of a distracted brain. Instead, it is the useful tool of a brain that is trying to stay focused.

Doodling keeps your brain connected enough to the task at hand that it doesn’t skip off to other, more fanciful, lines of thought when the current task is boring.

While the researchers found that taking more notes can be beneficial, the laptop note takers tended to transcribe lectures verbatim rather than processing the information. Longhand notes resulted in better cognition as students reframed ideas in their own words and had the capacity to diagram.

Taking notes longhand is more than just recording information. There is valuable thinking that happens as you do it—and that processing helps with memory and understanding.

A research study by Jeremy A. Yocum, “Who Doodles and Why?” uncovered something unexpected to the researcher. In a study with over 1,000 participants, it turned out that doodlers weren’t confined to jobs in design or the arts.

In Yocum’s study, a full 86% of the computer and information employees said they doodle, which smashed the stereotype that doodling is for designers and artists alone.

Speaking of serious jobs, did you know that even president’s doodle? An article in The Atlantic reports on doodles from Presidents from Thomas Jefferson to George HW Bush. (Andrew Jackson’s alligator was particularly entertaining.)

The point is that if both information and heads of state can doodle—some on letterhead with an official looking national seal—your marked-up agenda margins are in good company.

Teams are better problem solvers when there are graphic representations of problems.

In a 2011 study of engineers in the semiconductor industry, it was found that graphic representations made a difference in problem solving. It helped teams form shared mental models of both problems and envisioned solutions producing better results.

Of course, this isn’t unique to engineering. The rise of the use of graphic facilitation in meetings across many industries is proof that corporations are discovering the value of visual processing in solving problems and developing consensus on ideas.

(Which means that maybe you should be taking your doodles from your notebook to the whiteboard.)

The evidence shows that drawing is thinking.

In her breakthrough book, The Doodle Revolution, Sunni Brown writes, “There’s a legitimate reason why doodles show up in the notebooks of our most celebrated thinkers, scientists, writers, and innovators. And, surprise, it has nothing to do with doing nothing. There’s too much evidence that suggests that what’s really happening is that a doodler is engaging in deep and necessary information processing. A doodler is connecting neurological pathways with previously disconnected pathways. A doodler is concentrating intently, sifting through information, conscious and otherwise, and—much more often than we realize—generating massive insights.”

This generation of massive insights is part of what makes doodling so valuable. It moves the thought processes from our language center to the visual centers in our brain. Which often leads to seeing something we didn’t notice before.

Pick up a pencil, and make your brain better

While doodlers may not often think about the brain function behind their wiggles, lines, and dots on a page, science is increasingly providing evidence that doodling is a thinking process rather than a drawing process.

There is something inside of us that wants to reflect on paper—and that something doesn’t always communicate with words. Sometimes it communicates with shapes and scribbles that we are only halfway conscious of.

The reason most of us feel embarrassed is because we associate doodles with a lack of smarts or technical know-how—which is a myth that seriously needs to die. After all, why would we ever want to stop this amazing process, if it makes us smarter, creates better analysis, assists in problem solving, and improves our focus?

So, the next time you look down at your paper and see it covered with scribbles that have nothing to do with the topic at hand?

You’re going to smile and know what those doodles really mean.

They are science-backed evidence that you are WAY smarter than that person sitting next to you.

So, go ahead, give yourself permission to doodle.

You now know that your brain will thank you!

Learn more about doodling in our online course!

How To Start (and Keep) a Visual Journal

Want to leverage doodles in your journaling practice? Subscribe to download the free Quickstart Guide to Visual Journaling!

Think on Paper (12 Creatives Who Will Inspire You)
Next

I take my journal with me everywhere. You never kn

I got to have coffee with St. Stephanie (aka @sdth

The thing about this journal prompt is that you ma

I love how freely kids draw. Makenna drew me and h

When I first started meditating, it made me anxiou

I'm finding I am happier when I get to do creative

One of my resolutions this year is to draw every d

The first time I was invited to a vision board par

Some links on this site are affiliate links and as an Amazon Associate I earn from qualifying purchases. The author receives a  small (really small) commission if you happen to buy something.  Funds are used to support journaling supplies, a Toyota Yaris, & four crazy sweet Aussies who bark for treats every time I come in the door. (To be fair, I have a pattern of giving in to them.) I write about all kinds of journaling, and if Bullet Journaling is your thing, I’m here to support you. But if you want to go deep, go to the original source–Ryder Carroll, who created the system, and started it all at bulletjournal.com. I use the method daily which is why I started writing about it here.