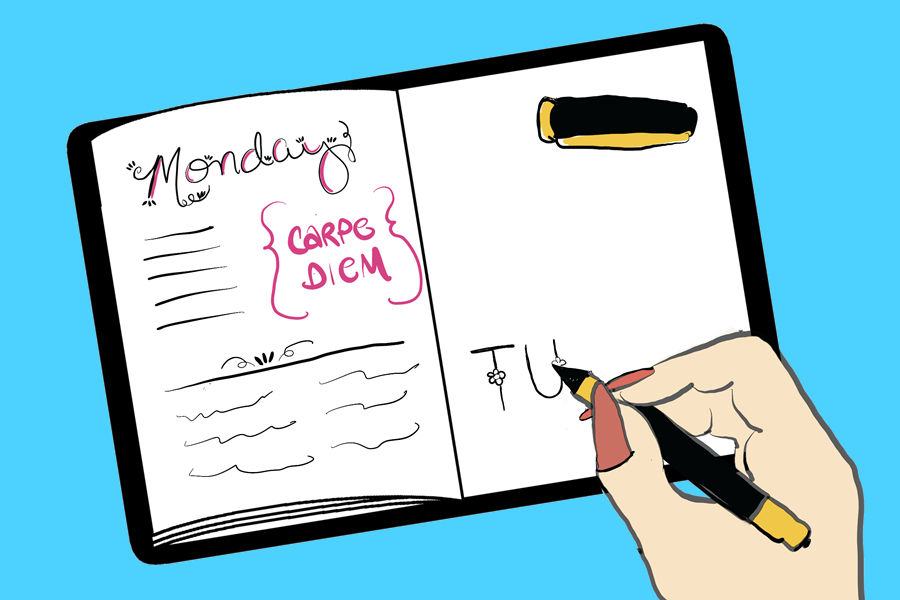 You see those beautiful hand-lettered Bullet Journal fonts on Instagram, but how are you supposed to pull that off? Sure, it would be fun to learn how to draw vines on letters, but who has that kind of time?

After all, you have a family. And a day job.

Sure, maybe an artist can create hand lettered words quickly, but what about normal people who just like the way it looks?

Can you really do this without hours of work?

The thing about hand lettering is that you already have a knowledge base. After all, you already know how to write the 26 letters of the alphabet. You practiced on paper as a kid—maybe in a Big Chief tablet—so there’s some muscle memory there.

Getting from basic, to hand lettered Bullet Journal fonts is a simple matter of drawing a few extra lines, dots, petals or curly-Qs. Best of all, you can do it surprisingly quickly.

Here are 12 hand-lettered Bullet Journal fonts that are easy to create and don’t require an art degree to pull off:

This font is created by drawing an extra line on the left side of the letter, filling the space with color and adding some dots. It’s easy to do, but looks like you worked hard at it. (The best possible hand lettering combination.)

Of course, you don’t have to just fill the space with dots. You can leave it a solid color, add stripes or vines or anything you can think of to fill the narrow space to make it look like more than just a letter.

If you’ve ever wondered how to draw vines on letters, this one is way simpler than it looks. You write the letters you want to use in black, then with a green colored pencil or marker, draw a squiggly vine around portions of the letter creating a couple of super basic leaves on the ends. (You can also add some leaves in the middle of the vine.)  Add a line of red at the edge of each leaf and it looks like a bud.

If you want, you can get more complex with your leaves and flowers, but when you want to move quickly, this technique is simple.

Why draw a straight line when you could randomly loop one? This font is about throwing in a couple of loops while you are drawing the letters.

You can test drive the technique with a calligraphy pen to get a more formal result, but this version is pulled off with a simple studio pen for ease and speed.

It doesn’t get any simpler than this. Write your letters, then go back with a colored marker or pencil and trace the edges.

To make it dimensional, trace outside the left portions of the letter and inside the portions on the right. But really, you can’t mess this up. It looks great no matter where you put the colored lines.

This one takes a little bit of pause before you write the letter, because to leave room for the flowers, you will need to add some gaps to draw the flowers in. The cool thing is that it doesn’t matter where you put the gaps. They can be random.

And, even if you happen to use a letter twice (like say two E’s in a word), each can have the flowers placed in different positions. Hand lettered is awesome that way.

If you ever made a poster in high school, chances are you drew something that looked like this. You draw the outline shape of the letter, come back and put the “holes” in. Then color the inside of it.

This font is all about the pen you use. You can pick up a calligraphy marker at any pen or stationary store in a variety of colors. While there is an art to calligraphy that can take years to master, with a calligraphy pen, you can create some pretty fancy looking letters just by drawing letters in separate strokes.

For example, with the A, you would draw three simple lines separate to each other. For the B, you draw two strokes–one for the vertical line and the other for the curves. (You can go back to add the serifs.) Because the pen is chiseled, the finishes of each of those lines taper–which is what gives it the cool look.

Remember those “Happy Birthday” signs where the letters hang? You can create that vibe just by drawing block letters, coloring them in, and adding some “string.”

Dropping shapes like yellow moons, orange stars, pink hearts, blue diamonds, and green clovers (are you thinking of a childhood breakfast yet?) onto the strings gives it personality and makes it feel more like a celebration.

You can add dimension to block letters by adding horizontal lines that angle back away from your original block letter. The key to this is to only do this on one side of the letter and to say consistent with your angles.

Start by drawing your block letters. Pick the right or left side. (I usually go right.) Then add angled lines to create the dimension. (It’s easier to see this via video. Hit play below.)

This hand lettered font seems complex, but once you get the hang of it, it’s actually pretty fun–and quick– to produce.

Draw your letters in black, but add curls anywhere a line crosses another line. You can do this while writing the letter, or you can add them after you get the basic letter down. Drop three petals into some of the spaces where there is an angle. Then finish by adding a line of color to one side of the letter.

For this font, you use a straight edge to create the string at the top. (Or you can wing it, keep in mind that journals don’t judge.)  Draw your letters spaced as evenly as practical underneath the line. Then draw the flags around each letter. (You could also draw the flags first. No magic here.) Color in the flags,then go back over the letters so that they are thick enough to be seen against the color.

This one is a little more time consuming because you have to layer the build, so save it for special occasions or short words!

Arrow letters are simple, quick, and communicate motion. Just write the word in your best, most proper cursive, then finish the line of the last letter in an arrow. Go back and put the end of the arrow—complete with feathers—at the beginning of the word.

Writing just a single word in a hand lettered font on a page changes the whole look of a Bullet Journal layout.  And now you know the secret: you don’t have to be an artist to do this..

With very few embellishments around some letters, your Bullet Journal can look—and feel—like a Pinterest-celebrity artist did this.

Best of all, using these hand lettered Bullet Journal fonts is fast. After all, your journal is just a tool for your life. It’s not your actual life.

Pick up your pen. After all, who knew it was so easy to learn how to draw vines on letters or create such cool looking page headers? Next thing you know, you’ll be graduating to sketchnotes!

And if you decide to put it on Instagram, tag it with #yourvisualjournal so we can all heart your success!

Want a quick tutorial on how to get started with visual journaling? Subscribe to download the free Quickstart Guide to Visual Journaling!

Why daytimers and planners never organize your life