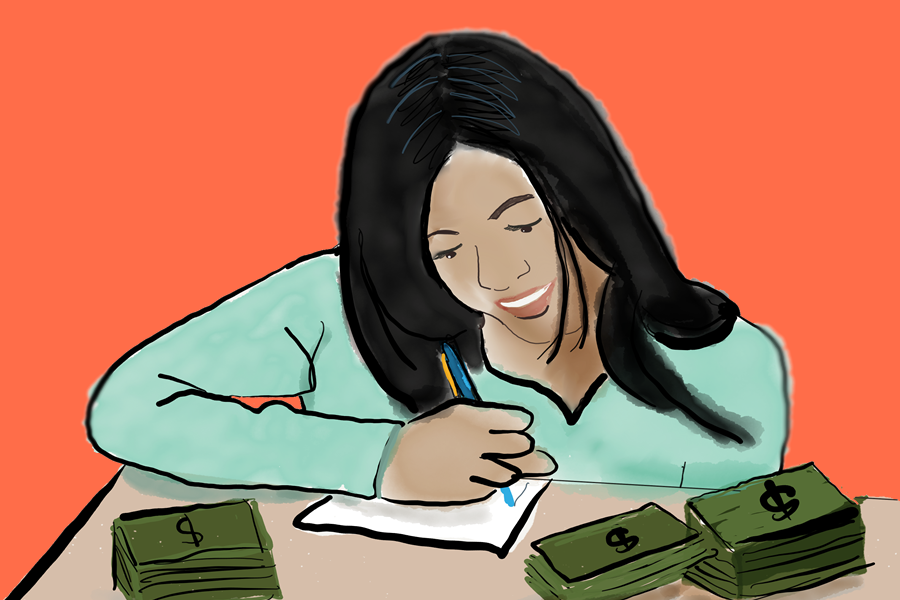 Gratitude practices — like journaling things you are thankful for — have been proven to increase happiness and life satisfaction.

But can it actually make you rich?

In the The Science of Getting Rich, Wallace Wattles writes, “The grateful mind is constantly fixed upon the best. Therefore, it tends to become the best; it takes the form or character of the best and will receive the best.”

Most of us agree that gratitude is a good thing. The question is: can it create what wasn’t there before? Tangible things…like opportunity…or a great space to live in…or actual personal wealth.

If you are looking for evidence, here are 10 wealthy people who are logging the things they are grateful for. And it seems to be paying off — in a big way:

Well-known, media mogul, award-winning television host, actress, and author Oprah Winfrey is one of the most influential people on the planet.

In her article, What Oprah Knows for Sure About Gratitude, Winfrey writes: “For years I’ve been advocating the power and pleasure of being grateful. I kept a gratitude journal for a full decade without fail — and urged you all to do the same. Then life got busy. My schedule overwhelmed me. I still opened my journal some nights, but my ritual of writing down five things I was grateful for every day started slipping away.”

Winfrey recounts that when she let the demands of her career push out the practice, her joy started to wane. She shares, “Recently, in the process of building a television network, I got so focused on the difficulty of the climb that I lost sight of being grateful for simply having a mountain to climb. Only when I began feeling gratitude for the opportunity to serve a new audience in a new way did a shift happen. Viewers started saying the most amazing things — things that aligned exactly with my vision of what OWN can be.”

Tony Robbins is a philanthropist, entrepreneur, and motivational speaker known for his seminars, and self-help books including Unlimited Power and Awaken the Giant Within.

Not only does Robbins have a personal gratitude practice, he also encourages others to do the same.

“I believe the ultimate path to enlightenment is the cultivation of gratitude. When you’re grateful, fear disappears. When you’re grateful, lack disappears. You feel a sense that life is uniquely blessed, but at the same time, you feel like you’re part of everything that exists and you know that you are not the source of it. In that state, you show up differently for the people around you.”

Cindy Crawford is an internationally known American supermodel and actress. In an interview with New York Magazine’s The Cut, Crawford shared how a gratitude moment is part of her daily routine.

“I live in Malibu at the beach so the first thing I do is go out and get in the Jacuzzi. I look at the ocean as the sun is coming up and watch that every morning. That’s the time before anyone needs anything from me, so I can walk through my day and see where something might slip through the cracks. It’s also when I can have that gratitude moment. And when I get out I have a green tea.”

Kelsey Grammer is an actor, comedian, television producer, director, and writer, who is best known for his two-decade portrayal of character “Frasier Crane” on the sitcom Cheers and its spinoff, Frasier.

The talented star of screen and stage has suffered much hardship in his life, including the murder of his father and sister and a struggle with alcohol and drug addiction. Grammer shared with Vanity Fair, ” “Every one of us is going to experience some terrible loss. I just got a big dose. For every story you hear that’s tragic, there’s another that’s equally tragic or more so. I think you come to look at it as part of life.”

In a Time magazine article, Grammer told the interviewer “I hit my knees every day and express gratitude.”

Chris Pratt is an actor who moved from a supporting role in the sitcom Parks and Recreation to a blockbuster action hero with credits such as Guardians of the Galaxy and Jurassic World in addition to dramatic roles like Passengers.

Pratt is a devout Christian thanking Jesus at the 2017 Teen Choice Awards, and gratitude is part of his daily practice.

“Usually before I eat a meal I’ll list the things for which I’m grateful,” Pratt once told Hollywood journalist Jeanne Wolf.

Willie Nelson is a legendary country music singer-songwriter, as well as an actor and activist.

The critical and commercial success of the albums Shotgun Willie, Red Headed Stranger and Stardust, made Nelson one of the most recognized artists in country music.

Nelson has earned his net worth through his musical career, songwriting and his many roles in television and films, as well as the writing of his autobiography and other books.

Nelson is quoted as saying, “When I started counting my blessings, my whole life turned around.”

Bob Proctor is a Canadian American author, entrepreneur, and motivational speaker who has a net worth of $20 million. Proctor begins each day listing 10 things he is grateful for.

“Expressing gratitude instantly shifts your energy. It puts you in harmony with your source of supply so that the good in everything moves toward you.

Many people express gratitude first thing in the morning or before going to bed at night. Well, here’s another time to express it: whenever you feel overwhelmed with problems.

You see, if you have challenges in your life that are dominating your thinking — a shortage of money, a business problem, a relationship problem — you will have a tendency to focus on the problem. And by doing that, you add energy to the problem. And then the problem grows.

The next time things don’t seem to be going your way, just stop what you’re doing, and think about all of the things you have to be grateful for. I know that’s a pretty tall order, but if you do it, everything will start to shift in an instant. Just like snapping your fingers. When you change the way you look at the problems, the problems will change.”

Eckhart Tolle is a spiritual leader and author who has a net worth of $15 million dollars.

“Acknowledging the good that you already have in your life is the foundation for all abundance.”

Will Arnett is an actor and comedian known for his roles on Arrested Development and in popular movies such as Blades of Glory, Show Dogs, and plays Batman in the LEGO Movie franchise.

“Every single morning, I write a gratuity list. I write down ten things I’m grateful for every day — and it always starts with my kids,” shares Arnett.

Dr. John Demartini is a researcher, educator, and public speaker. He is the author of The Gratitude Effect.

Martini writes, “Gratitude is the key that opens up the gateway of your heart that allows the untapped and inspiring potential of love to radiate out and cleanse your mind of any clouding uncertainties that could block you from living your most amazing and extraordinary life and dream. When you are grateful for what you have you get more to be grateful for. Your life is fulfilled to the degree of your gratitude.”

Research says, this doesn’t just work for people who are already wealthy. It can make you into someone who can create it.

Robert A. Emmons, PhD, the world’s leading scientific expert on gratitude, is a professor of psychology at the University of California, Davis, and the founding editor-in-chief of The Journal of Positive Psychology.

Emmons scientific research in collaboration with Michael McCullough, PhD, psychologist at the University of Miami uncovered scientific proof that “when people regularly engage in the systematic cultivation of gratitude, they experience a variety of measurable benefits: psychological, physical, and interpersonal. The evidence on gratitude contradicts the widely held view that all people have a set-point of happiness that cannot be reset by any known means: in some cases, people have reported that gratitude led to transformative life changes.”

In his book, Thanks! How the New Science of Gratitude Can Make You Happier, Emmons writes:

“An implicit assumption that many of us hold is that happiness depends on happenings — by what happens in our lives. We believe that success in life — whether in the boardroom or the bedroom — makes people happier. “

From living in a garage, to being rich.

Jen Sincero, author of You Are A Badass at Making Money, shares her very personal story of moving from living paycheck-to-paycheck to having real wealth.

“We’ve been raised to believe that if you work really hard, you’ll make a lot of money — and that’s true — but this mindset stuff will make the work that you do so much easier. It’s about working smarter, not harder. Gratitude is what builds up the emotional reservoir that helps you kick serious ass.”

What if you’ve been sitting on a hidden practice all along that could dramatically increase your personal wealth?

Could it really be as simple as pulling out a piece of paper each day to list what you are grateful for?

One thing is for sure, it doesn’t cost you a dime to try it and find out.

Want tips on how to journal? Get the free ebook on How to Journal with 28 ways to journal and hundreds of resources so you can find the method that is right for you.

If you liked this article, you may also like: The Skeptic’s Guide to Gratitude Journaling by Rosemary Bointon.

Or the community discussion on OutwitTrade: Why Is Gratitude Important For Recovery, Success, Mental Health And More?

I take my journal with me everywhere. You never kn

I got to have coffee with St. Stephanie (aka @sdth

The thing about this journal prompt is that you ma

I love how freely kids draw. Makenna drew me and h

When I first started meditating, it made me anxiou

I'm finding I am happier when I get to do creative

One of my resolutions this year is to draw every d

The first time I was invited to a vision board par

Some links on this site are affiliate links and as an Amazon Associate I earn from qualifying purchases. The author receives a  small (really small) commission if you happen to buy something.  Funds are used to support journaling supplies, a Toyota Yaris, & four crazy sweet Aussies who bark for treats every time I come in the door. (To be fair, I have a pattern of giving in to them.) I write about all kinds of journaling, and if Bullet Journaling is your thing, I’m here to support you. But if you want to go deep, go to the original source–Ryder Carroll, who created the system, and started it all at bulletjournal.com. I use the method daily which is why I started writing about it here.